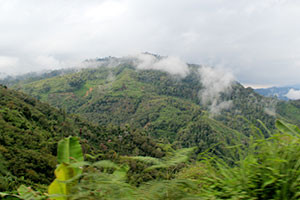 This AB quality coffee comes from the Muriba CPU (“Central Processing Unit”) that serves ten farmer groups across 15 villages, near the town of Tarime, in the Mara area of northern Tanzania. From having no production in 2013, the CPU processed nearly two million kilos of cherry in the 2015 season, and production is still increasing. The area experiences two seasons of rainfall, the long rains from March to May and the short rains from October to December. On average they receive 1400mm of rainfall per year, which means there is great access to water. Production cycle follows the standard timeframe for the Northern Tanzanian coffee harvest which roughly coincides with the Kenyan production cycle across the border; main crop is harvested September through December and fly crop harvested March through June. The average farmer has around one acre of land, planted with on average nearly 550 trees per acre. The cherry production per tree is below one kg, which is very low, and there is a high potential of increasing production in the coming years. Most contributors to the CPU are subsistence farmers who also grow tea, bananas, maize, millet, beans, potatoes and cassava, much of it intercropped with their coffee. After picking, ripe cherry is brought to the CPU to be wet processed using a disc pulper and washing channels. Time on the drying tables depends on ambient temperature and moisture, and total production volume undergoing processing, taking from 7 to 15 days in total. Frequent turning and sorting will happen during the drying stage. Wastewater is managed through the use of soaking pits. The water used for processing the cherry will spend time in the pits to insure that the nutrient rich water created during fermentation will not be returned to the nearby water source without proper treatment. This additional step will cut down the risk of contamination, and then after adequate time for reabsorption the water will be recirculated. The variety is primarily N39, which is a TACRI (Tanzanian Coffee Research Institute) cultivar of Bourbon.

Who is Riviera Coffee?

Established 2001. We are a specialty coffee roaster offering the highest quality beans sourced from around the world.

Riviera partners closely with its coffee importers who specialize in sustainability, market stability and building relationships with producer and farmers. [Read More]